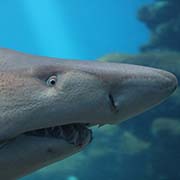 A team of palaeontologists headed by David Cicimurri from the South Carolina State Museum in Columbia describe two new fossil shark species from Georgia and Alabama in the United States which are approximately 65 and 35 million years old, respectively. The two new species belong to the genus Mennerotodus and are closely related to modern sand tiger sharks. This is the first evidence of Mennerotodus in the US and the oldest find of this genus worldwide, indicating that this group of sharks has its evolutionary origins in the southeastern United States.

The press release from the McWane Science Center can be found at https://www.mcwane.org/new-shark-species-discovered/